• FESTA DELLA MADONNA DELLA GROTTA – 2-3 luglio
The Madonna of the cave festival dates back to the popular legend of an old blid man living in the Cacorzu area (in the countryside, not far from the centre of the village). In the 16th century, an old blind man seeked refuge in a cave of the area, he fell asleep and saw Mary the Madonna in his dreams, who asked him to build a temple in her honour. Miracolously healed, the man informed the local priest and the following day an image of Maria, carrying the baby Jesus, appare in the same cave.
The story, handed down throughout the centuries, is also the theme of a song sung during the traditional cerimony in honour of Mary on Jul the 2nd, the anniversary of the event
The founding of the Byzantin image in 1568 is a certain fact, as reported in some official documents. The “old blind man” was in reality Frangisco Vincenti, and his death certificate was found in the local register. 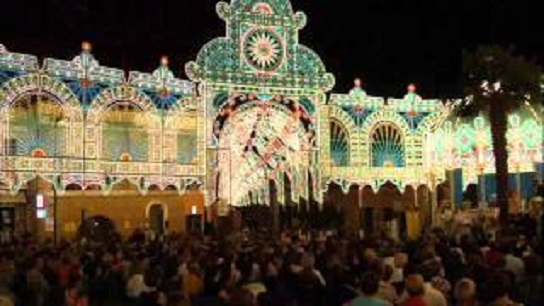 • Every year, on the first weekend of September, the “Festa te lu mieru” (Wine festival) is held in Carpignano. It is one of the most famous and attended festivals in Salento during the summer season. The first edition dates back to 1974
Originally, the festival was a popular representation of local wines. It is particulary well-know for the fact that wine is distributed for free

• The Saint Cosma and Damiano festival dates back to before the year 1000 A.C., and it takes place every year on November 1st, in connection with the local fair